Jason Day, on the verge of becoming the world's top golfer; remembers his childhood and mother's sacrifices


A Filipino/Australian is in the running to become the best golfer in the world --BEST ... IN THE WORLD!

Of course, in the world of golf, being the "best" is ephemeral.

Four weeks ago, Jordan Spieth was the best golfer in the world.

Next month, it could be Rory McIlroy.

But, by this weekend, it could be Jason Day, an Aussie, whose mother is a Filipina, who might be able to claim that title.

All three players will be competing in the Deutsche Bank Championship, which begins Friday (Sept. 4) and concludes Monday. (Sept. 7). If Day conquers the Boston course and wins; and McIlroy and Spieth each finish lower than second place, Day would become the 19th player since the world ranking's inception in 1986 to ascend to that honor.
"I never thought I'd have the opportunity, mathematically, to get to No. 1," Day said after last Sunday's win. "It's been a goal of mine. Right now, I just can't focus on that. ... The only way I can control it is through playing good golf."

Like Spieth, Day owns four PGA Tour victories this season. Day has come on like gangbusters by winning three of his past four tournament starts, including the recent PGA Championship for his first career major title. After winning, the emotion-filled Day took time to reflect on his journey and his mother, Adenil Grapilon, known as Dening, who hails from Carigara, Leyte. He scooped up his son Dash and tears filled his eyes.

“I’ve changed so much from where I was and what I saw as a kid to where I am now,” said Day. “I mean, it’s just an amazing feeling, an amazing story to really be able to tell people, to give them insight on what I felt and the emotions that I’ve gone through growing up as a kid in Australia and losing my dad very young. I have no idea where I would be, what I would be doing, probably wouldn’t be doing much of anything. And I wouldn’t be challenging myself and trying to better myself if I didn’t have the people that I have in my life today.

“I remember growing up, we were poor. I remember watching her cut the lawn with a knife because we couldn’t afford to fix the lawn mower. I remember not having a hot water tank, so we had to use a kettle for hot showers. So, you know, we would put the kettle on and go have a shower, and then my mum would come bring three or four kettles in, just to heat them up. And it would take five, 10 minutes for every kettle to heat up.

“So just to be able to sit in front of you guys today and think about those stories, it gets me emotional knowing that I’m the PGA champion now and it feels good.”

June 12: The story of betrayal that followed the original Philippine Independence Day

Historical rendering depicts Filipinos declaring their independence from Spain on June 12, 1898. THIRTEEN years after the U.S. and... 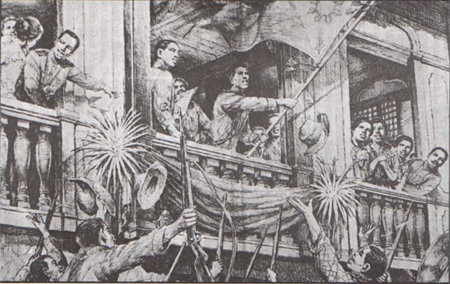